Italian News Headlines 27-01-2023 - Sofia Goggia has won the downhill ski race in Cortina d'Ampezzo to claim the 21st World Cup win of her career --- $20 million worth of archaeological treasures have been returned to Italy from the US, including a fresco from Pompei --- Italian doctors carry out the first lung transplant from a living donor --- Italian film actress, Gina Lollobrigida, has died at the age of 95 --- Cosa Nostra boss, Matteo Messina Denaro, has been arrested in Palermo after 30 years on the run
Portrait of Galileo Galilei by Justus Sustermans, 1636

Galileo Galilei was born on 15th February, 1564, in Pisa, Tuscany. He was the oldest of six, possibly seven, children. His father, Vincenzo Galilei, was a famous musician and composer. His mother's name was Giulia degli Ammannati. Although not wealthy, the family were from the Italian nobility.

Although he remained unmarried, Galileo had a relationship with a woman called Marina Gamba and together they had three children. Their two illegitimate daughters, Virginia and Livia, were both forced to enter a convent while their son was eventually legitimised as Galileo's legal heir.

A devout catholic, Galileo originally intended to become a priest but his father encouraged him to enter the University of Pisa and study for a medical degree instead. He soon discovered a preference for mathematics and launched a career as a physicist, mathematician, astronomer, and philosopher that would see him become one of the most influential scientists in history.

Dome of the Cathedral of Pisa with the 'lamp of Galileo'

Galileo is recognised for his work with telescopes, compasses, pendulums and clocks. He is also recognised for developing a number of important theories which have led him to be called the "Father of Modern Science". 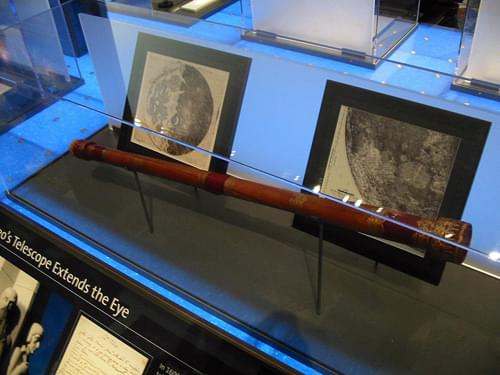 A replica of the earliest surviving telescope attributed to Galileo
Photo: Michael Dunn

In his book, 'On Motion', Galileo famously contradicted Aristole's assertion that "heavier objects fall faster through a medium than lighter ones" asserting instead that "all objects, regardless of their density, fall at the same rate in a vacuum". Legend has it that he tested his theory by dropping two cannonballs from the top of the Leaning Tower of Pisa.

He also developed 'the basic principle of relativity' which provided the framework for Newton's 'Laws of motion' and Einstein's 'Special theory of relativity'.

However, it was for his investigations in the 'Laws of the Universe' that he is probably best known.

In the 16th and 17th centuries, the Roman Catholic Church followed the doctrines of Aristotle, that the Earth was the centre of the universe and that all heavenly bodies revolved around the Earth. Galileo's various studies and experiements led to him being drawn to the Copernican theory that the earth and planets revolved around the sun, ideas that led him into direct conflict with the Church.

In 1616, Galileo was called before the Roman Inquisition on charges of heresy. He tried to defend his theories on the grounds that the ideas did not contradict the scriptures. The Church did not accept his justification and he was forced to retract his statements and refrain from working on his theories any further.

In 1623 Cardinal Maffeo Barberini became Pope Urban VIII. He was a supporter of Galileo and he persuaded him to publish his ideas in a book entitled 'Dialogue Concerning the Two Chief World Systems'. However, the Pope's support had been conditional on Galileo presenting a balanced view of the conflicting arguments, and including the Pope's own views. He broke the first condition by unashamedly promoting Copernican Theory, and he included the Pope's ideas in such a way as to make him appear foolish. The Pope was not amused and withdrew his support.

The subsequent trial resulted in Galileo being forced to recant his beliefs and being sentenced to house arrest, where he remained for the rest of his life. It also banned the publication of any of his past, present or future works.

Statue of Galileo outside the Uffizi, Florence - Photo: JoJan

It was while under house arrest that Galileo wrote a book called 'Two New Sciences', based on work he had done forty years previously. The book, published in Holland to avoid the Roman Catholic censor, is one of his most influential works and has led him being called the "father of modern physics".

He died at the age 77 on 8 January 1642. Because of his condemnation for heresy, he was initially buried in a small room in the Basilica of Santa Croce in Florence. In 1737, he was moved to the main building and a monument was erected in his honour.

Manta (shocking pink)
The softest leather shoulder bag you could wish for!
€192.50

Shades of Tuscany (celeste)
Set of 2 espresso cups and saucers
€26.75
Newsletter
Enter your email address below to receive our free newsletter, containing extracts from our most recent articles, a window on Italian news, fashion, music and culture,
useful information for visiting and living in Italy as wll as our latest, delicious Italian recipes.