Siena is the capital of province of Siena in the region of Tuscany, Italy. It is one of the most visited cities in Italy with hundreds of thousands of tourists pouring into the city every year. The beautiful Historic Centre has been declared a UNESCO World Heritage Site.

Piazza del Campo is the main square of the historic centre and is largely thought of as being one of the best and most beautiful medieval squares in the whole of Europe. Shaped like a large shell it is both visually and architecturally unique. The Palio horse race (link) is held twice a year around the Piazza del Campo.

Torre del Mangia is the bell tower of Palazzo Pubblico to which it is attached. The tower was built in the mid 14th century and at the time, due to it having been built to rival the one in Florence, it was the tallest structure in Italy.

Lining the sides of Piazza del Campo are many of the main historic buildings such as the Palazzo Pubblico, built at the end of the 13th century which was, and still is, the Town Hall.

Fonte Gaia is a monumental fountain which was first constructed in 1342 with underground pipes bringing water from 25 kilometres away. The current decorative surround to the fountain was constructed in 1419 by Jacopo della Quercia but the original marble panels were replaced by copies at the end of the 19th century. 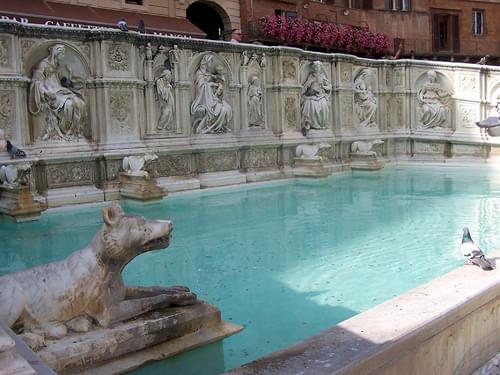 The other main sights to visit in this beautiful city are:

Palazzo Salimbeni which is located on the edge of Piazza Salimbeni and is still the original headquarters of Monte dei Paschi di Siena which is one of the oldest banks in Europe.

The Cathedral, widely considered to be a masterpiece of Italian Romanesque-Gothic architecture, was constructed in the 12th century. There is an internal staircase which you can climb to obtain a panoramic view of the city.

The Basilica of San Domenico was built in the mid 13th century and is one of the most important religious buildings in the city. It was enlarged during the 14th century but suffered damage in the 15th century during a series of fires. This church houses several relics of St. Catherine of Siena.

Santa Maria dei Servi is a Romanesque style church built over the former church of St Clement in the 13th century. It underwent major reconstruction and refurbishment right up to the end of the 15th century. On the outside it is a simple church with a single doorway and a rose window but the interior, by contrast, is heavily decorated.

The bell tower was also built in the 13th century and was fully restored in the 20th century. San Francesco is a basilica church and was erected in the mid 13th century before being enlarged in both the 14th and 15th centuries. It was originally built in the Romanesque style but after the enlargements it was, and still is, Gothic. It was badly destroyed by fire in 1655 and still looks rather stark inside.

Santo Spirito is a Renaissance style church and was built in 1345. It underwent major reconstruction between the years 1498 and 1504.

San Martino is a 12th century church which was rebuilt and enlarged in the 16th century. The current Baroque façade was added in 1613 and the bell tower in 1738. The church stands next to the Renaissance style 'Logge del Papa' which was commissioned in 1462 by Pope Pius II Piccolomini.

The Basilica dell'Osservanza is not in the city centre but on the outskirts of Siena, It was built at the end of the 15th century and enlarged in few years later.

During World War II it was almost completely destroyed by American bombing but was sympathetically restored afterwards with photographs and evidence presented by the monks of the monastery.

The Siena Synagogue is a noteworthy historic building and is open to visitors.

Castello di Belcaro is actually a Renaissance villa which was built in 1525 on the site of a ancient castle that belonged to the Republice of Siena.

The Medicean Fortress on the edge of the town contains the Enoteca Italiana (wine repository) and the Siena Jazz School.

Housed in the notable Gothic Palazzo Chigi-Saracini on Via di Città is the Accademia Musicale Chigiana, Siena's conservatory of music.

The course includes many cultural trips to local places of archaeological, artistic and historical interest.
visit website
Learn Italian in Florence or Siena

The Scuola Leonardo da Vinci has schools in Florence and Siena and is officially authorized by the Italian Ministry of Education.
visit website
Learn Italian in Florence

Situated in one of the oldest and liveliest parts of the city of Florence, The ABC School has been teaching the Italian language to foreign students since 1982.
visit website
Flag of Tuscany

Verona
Newsletter
Enter your email address below to receive our free, monthly newsletter containing all our most recent articles, current stories in the Italian news,
useful information for expats and visitors and our latest, delicious Italian recipes.
We will not use your email address for any other purpose or pass it on to any other organisation and you can unsubscribe from this service at any time.