Marble quarries in the province of Massa-Carrara

Geographically the province is roughly divided into two sections, the coast which is relatively flat and has long beaches and the inland area which is very mountainous.

Massa is the joint capital, along with Carrara, of the Massa-Carrara province of Tuscany. It is a coastal town running along the Tyrrhenian sea and was first mentioned as early as the 2nd century. The two main squares in the town are Piazza degli Aranci and Piazza Mercuri.

Constructed in the 15th century and overlooks the city from a nearby hill.

Carrara is the joint capital, along with Massa, of the Massa-Carrara province of Tuscany. It is famous for the white and blue-grey marble which is quarried from the mountains above the city.

The main sights are:

The Cathedral of Sant'Andrea

Built in the 12th century.

(also known as Palazzo Ducale) was built over the top of an old Lombard fortification in the 16th century. It is now a Fine Arts Academy.

Constructed in the late 17th century and then refurbished in the 19th century.

(church and convent of Saint Francis) which was built between the years 1623 to 1664.

This is a walled town which has been of some importance since the early middle ages. The original town walls were constructed in 1478 and then rebuilt in the middle of the 16th century. They were finally largely demolished in 1835 in order to give air and light to the surrounding houses. Only a small portion remains along with three of the original entrance gates, Porta Sarzanese to the south, Porta Modenese to the north and Porta Nuova to the east.

The main points of interest within the town are:

In the centre of the main square, Piazza Medicea, which was erected in 1683.

An Augustinian monastery founded in 1391.

A botanical garden and nature preserve.

Located in the Palazzo Fantoni Bononi, was created by Loris Jacopo Bononi to honor the printer Jacopo da Fivizzano who printed the first books with typed characters around 1470.

An annual historic archery festival 'Didfida degli Arceri di Terra e di Corte' is held in Piazza Medicea every summer in the month of July. divided into two sections, the coast which is relatively flat and has long beaches and the inland area which is very mountainous. 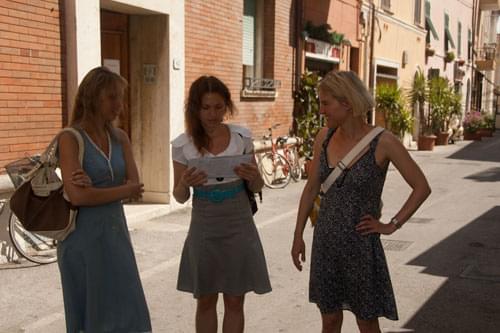 Situated in one of the oldest and liveliest parts of the city of Florence, The ABC School has been teaching the Italian language to foreign students since 1982.
visit website
Flag of Tuscany