The province of Brindisi is low, flat and blessed with a mild climate and sandy beaches. Although mainly coastal it is very fertile and grows artichokes and fruit along with vines and olives. For this reason it is a popular holiday destination and has a healthy tourist industry. 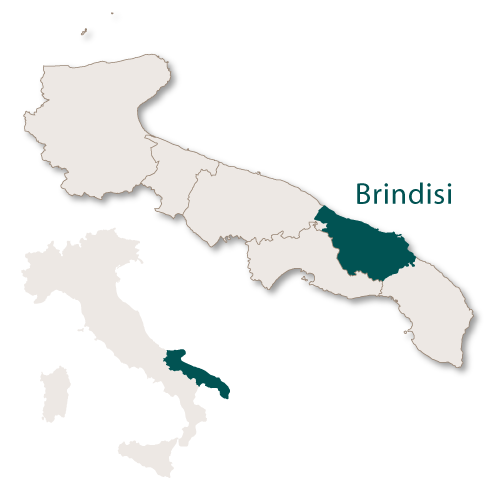 The capital city, Brindisi, is a natural port on the Adriatic Sea which has been known since ancient times as the 'Gateway to the East'. Still a major port today for trade with Greece and the Middle East it was once an important port for Roman troops and later for the merchants of Venice.

Two Roman columns were the symbol of Brindisi and although one remains the other has crumbled. It is thought that they were built to mark the end of the Appian Way but instead, they were used as navigation points by ancient mariners. There are two prominent castles in the city of Brindisi, Castello Grande built in the 13th century and the Aragonese castle Forte a Mare which is often referred to as the 'Red Castle' due to the colour of the bricks it was built from.

Other towns and cities of note in this province are beautiful whitewashed Ostuni with its cathedral and Cisternino, the centre of the Itria Valley and an interesting old town.

Puglia, at your own pace.

Trevi Fountain
Newsletter
Enter your email address below to receive our free, monthly newsletter containing all our most recent articles, current stories in the Italian news,
useful information for expats and visitors and our latest, delicious Italian recipes.
We will not use your email address for any other purpose or pass it on to any other organisation and you can unsubscribe from this service at any time.